Ehud Barak, the former prime minister who was crushed in an election six years ago, led a rally of hundreds of supporters in his first major show of force since announcing his political comeback. 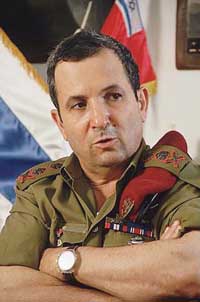 Barak, vying to win the leadership of the dovish Labor in a May primary, held the rally in the dining hall of a kibbutz near Tel Aviv on Sunday night, drawing some 1,500 supporters, according to media reports.

Barak unveiled his campaign slogan - "Barak will give us back our security" - and a new campaign jingle with the lyrics, "Barak is security, Barak is experience."

The reference to "security" is a jab at Labor's current leader, Defense Minister Amir Peretz, who has been dismally unpopular since Israel's war in Lebanon last summer. Peretz has been widely blamed for mishandling the war.

In a speech Sunday night, Barak referred to himself as "someone who has learned from his mistakes and learned his lessons."

A decorated commando and former army chief of staff, Barak swept to power in 1999 on a dovish platform and led a series of dramatic moves - pulling Israel's troops out of Lebanon after an 18-year occupation, holding peace talks with Syria and then trying to strike a peace agreement with the Palestinians.

But when those peace talks collapsed in 2000, the Palestinians began a bloody uprising that has claimed thousands of Israeli and Palestinian lives.

Discredited and unpopular, Barak was driven from power in a national election a few months after the outbreak of violence by hardliner Ariel Sharon, and left politics, reports AP.

With Peretz widely expected to lose the party leadership, Barak and Ayalon are the two front-runners to head Labor. While Barak enjoys an edge inside the party, polls show that Ayalon is more popular with the public.