Don King gets to see the pope 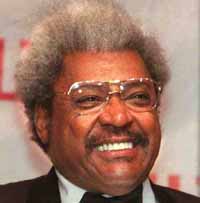 Don King gets to see the pope

The usually flamboyant boxing promoter, wearing a blue suit with his preferred high hair style primly flattened for the papal event, gave the pope a green-and-gold boxing belt and a handwritten letter asking for prayers for people ranging from U.S. President George W. Bush to the world's sick and aged.

"I was thrilled to be there. It was a deep spiritual experience," King told The Associated Press after the two-hour open air audience in St. Peter's Square.

In Rome to discuss the promotion of possible boxing matches in Italy, King had expressed his wish to meet with the pope and ask for prayers.

"Faith is the thing that carries us through," the 75-year-old King said as he walked through St. Peter's Square, waving Italian and Vatican flags, and signing autographs.

Alan Hopper, director of public relations for Don King Productions, said the visit to the Vatican was arranged through a boxer who King represents, Italian super welterweight champion Luca Messi, whose brother Alessandro is a Catholic priest.

King was seated in the front row of a special section on the steps of St. Peter's Basilica, and was able to hand the pope the gift and the letter as Benedict drove slowly by in an open jeep at the end of the audience.

King, who spent four years in prison for manslaughter, had hoped for a personal meeting with Benedict, but very few non-church people receive private time with the pope during his Wednesday audiences, reports AP.

Before arriving in Rome, King toured Messi's hometown, Bergamo. During the visit to the northern Italian city, King began a fundraising campaign to restore the city's church of St. Mary Major, which includes frescoed paintings on the walls of a pre-existing church buried underneath.