A judge ordered a DNA test Tuesday on Anna Nicole Smith's infant daughter to identify the girl's father, an attorney for Smith's mother said, in what could signal an end to a bitter custody feud sparked by the death of the former pinup last month. 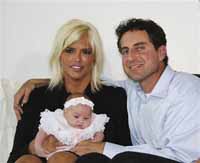 Larry Birkhead, an ex-boyfriend of the Playboy playmate who asked the judge to order the test on 6-month-old Dannielynn, pumped his fists in the air and jumped up and down as he emerged from the private court hearing.

"It's been a good day in court for me," he told reporters. "I can't really get into specifics, but tomorrow might be an even better day."

Asked if he thought he would be seeing the girl soon, he only smiled and winked.

Deborah Rose, an attorney for Smith's mother Virgie Arthur, confirmed that the judge ordered the test but she and others who attended the hearing declined to describe the proceedings.

Authorities left the building after the hearing and could not immediately be reached for comment.

Smith's most recent companion Howard K. Stern, who is listed as the father on the girl's birth certificate, left the courthouse in a black SUV as Birkhead greeted a crowd of cheering tourists.

Smith, 39, died after collapsing at a Florida hotel. Authorities have not disclosed the cause.

Stern has been caring for the girl in the gated, waterfront home where he lived with Smith in the months before she died. The Bahamian courts have ordered Stern not to leave the country with the girl before a custody ruling.

Arthur wants to take Dannielynn from Stern, arguing she could provide a more stable home. She did not speak as she left the courthouse and left in a white limousine.

The girl, Dannielynn Hope Marshall Stern, could inherit millions from the estate of Smith's late husband, Texas oil tycoon J. Howard Marshall II. Smith had been fighting his family over his estimated US$500 million (Ђ380 million) fortune since his death in 1995, reports AP.

A Los Angeles judge issued an order in December for Anna Nicole Smith to bring her daughter to California for paternity tests, but previous efforts by Birkhead's legal team to secure a DNA sample have not been successful.

Frederic von Anhalt, the husband of Zsa Zsa Gabor, also says he may be Dannielynn's father. Last month, he too filed legal documents seeking a DNA test to determine if he is the father.