U.S. Vice President Dick Cheney went back to George Washington University Hospital Tuesday for a follow up examination in connection with a blood clot discovered in his leg. 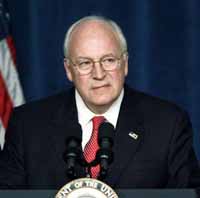 "He's getting a routine follow up on his leg. It's just a routine checkup," said spokeswoman Megan McGinn.

Just over two weeks ago, doctors discovered a blood clot in the vice president's leg. They said at the time that he likely would have to be treated with blood-thinning medication for several months.

Spokeswoman Lee Anne McBride said at the time that the 66-year-old had visited his doctor's office on March 5 after feeling minor discomfort in his calf. An ultrasound showed the blood clot called a deep venous thrombosis in his left lower leg.

Blood clots that form deep in the legs can become killers if they break off and float into the lungs. This is called a pulmonary embolism. Deep vein thrombosis strikes millions and can be fatal, reports AP.

Many people suffer DVT after spending long periods without moving, such as passengers on long-haul airline flights. Cheney had just spent about 65 hours on a plane on a nine-day, round-the-world trip.

Cheney has had had a host of heart-related problems over the years.

He had six hours of surgery on his legs in 2005 to repair a kind of aneurysm, a ballooning weak spot in an artery that can burst if left untreated. He has had four heart attacks, quadruple bypass surgery, two artery-clearing angioplasties and an operation to implant a special pacemaker in his chest.