First it was the queen. Now the Iron Lady is getting the British film treatment. 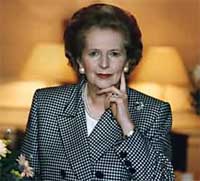 Pathe said the film would cover the 17 days leading up to the conflict and would focus on Thatcher's controversial decision to go to war over Britain's sparsely populated possessions in the South Atlantic.

Argentina, which claims the islands, invaded them in April 1982, and its troops were evicted two months later by a British task force.

More than 200 British soldiers and 655 Argentinians died in the war, but Britain's victory boosted Thatcher's flagging popularity. Her Conservative Party went on to win the 1983 election by a landslide, and she remained in power until 1990, transforming British society with her free-market policies.

Pathe said the conflict forced Thatcher to "confront her private fears, face down the men who doubted her and forge the image that even today casts a shadow across the political landscape."

The success of Stephen Frears' film "The Queen" - especially Helen Mirren's Oscar-winning depiction of Queen Elizabeth II in the week following the 1997 death of Princess Diana - has reawakened interest in British dramas about recent history.

Backed by Pathe, BBC Films and DJ Films, the Thatcher project is produced by Damian Jones, whose credits include "The History Boys" and "Welcome to Sarajevo." The script is being written by Brian Fillis, who wrote the British Broadcasting Corp. drama "Fear of Fanny," about television chef Fanny Craddock.

The Thatcher film has yet to be cast, and no director has been named, reports AP.

Thatcher has been portrayed before in film and television, although usually in a peripheral role. Most recently, Kika Markham played the British leader in "The Line of Beauty," a BBC television adaptation of Alan Hollinghurst's novel about sex and politics in the 1980s.