Prime Minister Dominique de Villepin said Thursday the international community must work to win both Arab and African support to resolve the four-year conflict that has left more than 200,000 people dead and 2.5 million displaced. He dismissed the idea of a Security Council resolution against Sudan, saying it would "only accelerate (the process) on paper." 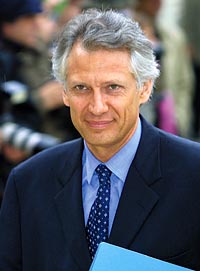 Villepin spoke to reporters after a meeting with Secretary-General Ban Ki-moon on a range of issues from French peacekeeping troops deployed in Lebanon to the Iranian nuclear standoff and support for the Israeli-Palestinian peace process.

Villepin said the humanitarian crisis in Darfur was one of the issues that should "be at the top of the United Nations' agenda."

He backed a proposed new Security Council resolution increasing sanctions against Iran, which was being introduced in the council as he spoke, saying it created "the basis for a solution."

The draft resolution calls for new sanctions to pressure Iran to suspend uranium enrichment. In December, the Security Council unanimously approved limited sanctions that targeted Iran's nuclear and missile programs because it refused to freeze enrichment. Since then, Tehran has stepped up its enrichment program.

"It's a progressive, reversible process," Villepin said of the new draft resolution. "We gave the choice to the Iranians."

Villepin pointed to the process of gradually stepping up sanctions that has shaped the Security Council's negotiations with Iran as a model for addressing all crises, which the council did not do before the current war in Iraq.

"I hope that we might also take from this experience, on another crisis, to understand that there is no solution for any crisis without collective will, support from the international community and the United Nations, and a very strict timetable," he said, reports AP.

France led opposition to U.S. and British efforts to get Security Council authorization for the Iraq war that toppled Saddam Hussein's government in 2003.