Russia, Greece and Bulgaria signed a deal Thursday to build a pipeline to transport Russian oil to a port in northern Greece. 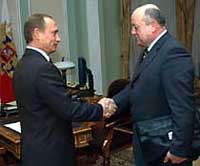 The 280-kilometer (175-mile) pipeline from Bulgaria's Black Sea port of Burgas will transport crude to the port of Alexandroupolis. The project will improve networks in southeastern Europe that transport oil and gas from the Caspian Sea region to the European Union.

Russian President Vladimir Putin had threatened to scrap the deal unless economic disputes were quickly resolved.

Russia already provides other parts of Europe with a third of its oil and 40 percent of its natural gas, and the pipeline deal is likely to deepen that dependence on energy from Russia, whose reliance as a supplier has been questioned.

Leaders in western Europe have talked of diversifying the continent's energy sources after several disruptions in supplies from Russia that resulted from price disputes between Moscow and former Soviet republics that serve as transit routes.

Putin traveled to Greece from Italy, where he endorsed several bilateral energy agreements.

"This pipeline demonstrates how all countries can benefit, not just in the Balkans but in Europe," Putin said. "Our work was in a spirit of cooperation friendship and partnership between the three countries."

Karamanlis said the deal will put Greece on the world energy map.

"This will benefit all three countries, and it puts Greece and Bulgaria on the world energy map," Karamanlis said. "It will also help international markets with improved access to oil at a time when energy is a fundamental global concern."

Claudia Kemfert, an analyst at the German Institute for Economic Research, cautioned that such pipeline deals increase dependence on a single source of energy.

"You get a strengthening of supply, but it can create higher dependency and other problems" Kemfert said, speaking by telephone from Berlin. "You always have a trade-off. ... To avoid this we need more diversification on the supply side, and to be less dependent on Russian energy."

"We need to look more to the global market ... but pipelines are not that flexible," he said.

First conceived in 1993, the Ђ900 million (US$1.2 billion) Burgas-Alexandroupolis pipeline will link the Black Sea to the Mediterranean, avoiding Turkey's crowded Bosphorus strait.

Russian firms will control a 51 percent stake in the venture, including infrastructure like pumping stations, storage facilities and loading docks, leaving EU-members Bulgaria and Greece with 24.5 percent each.

The Russian consortium is made up of state oil company OAO Rosneft, pipeline monopoly Transneft, and a subsidiary of state-controlled gas giant OAO Gazprom.

The 90-centimeter (36-inch) conduit will channel 700,000 barrels of oil a day to Greece, and has potential capacity of 1 million barrels.

But he added: "Where we are focusing most urgently now is diversification of gas supply ... away from its one primary supplier, Gazprom."

U.S. officials want Greece to prioritize gas from Azerbaijan in a natural gas network being built from Central Asia to Greece through Turkey that is due to continue onto Italy after 2011, reports AP.

A meeting of officials from Azerbaijan planned in Athens Thursday was postponed on the eve of the Putin visit.