Democratic presidential candidate Barack Obama got more than an education when he attended Harvard Law School in the late 1980s. He also got a healthy stack of parking tickets, most of which he never paid. 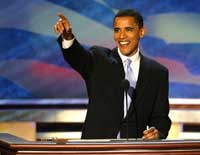 The Illinois Senator shelled out $375 (EUR285) in January two weeks before he officially launched his presidential campaign to finally pay for 15 outstanding parking tickets and their associated late fees.

The story was first reported Wednesday by The Somerville News.

Obama received 17 parking tickets in Cambridge between 1988 and 1991, mostly for parking in a bus stop, parking without a resident permit and failing to pay the meter, records from the Cambridge Traffic, Parking and Transportation office show.

Jen Psaki, a spokeswoman for the Obama campaign, dismissed the tickets as not relevant, reports AP.