Actress Elizabeth Hurley and her new husband Arun Nayar were set to continue their nuptials Friday with a traditional Hindu wedding ceremony followed by a royal procession of elephants, camels and horses through the grounds of a palace, officials said. 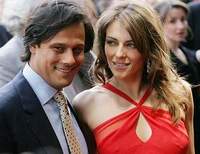 The couple were married last week in a private civil ceremony in a castle outside London and have been celebrating their union with a week of lavish parties in Mumbai, India's financial and entertainment capital, and in the desert state of Rajasthan.

The couple and about 250 guests were back at the Umaid Bhavan Palace in Jodhpur on Friday after a night of being serenaded by folk songs at a medieval fort, said organizers, who spoke on the condition of anonymity due to tight secrecy and security conditions imposed by the couple.

The guests that have been spotted so far include Princess Marie Chantal of Greece, pop icon Elton John's partner David Furnish and Indian industrialist Adi Godrej and his wife Parmeshwar, who hosted a beach front party for the couple in Mumbai. Other celebrities are rumored to be on their way for Friday's party.

"We have been partying all night these days and get hardly any time for sleep," Evelyn Lauder, daughter-in-law of Estee Lauder and senior corporate vice president of The Estee Lauder Cos, told The Times of India newspaper. "I doubt if even the couple are getting enough sleep."

At dusk Friday, Hurley and Nayar were to be united, again, in a Hindu wedding ceremony in which Nayar was to make his entrance on a white stallion.

This was to be followed by a wedding procession of elaborately painted elephants, camels and horses through the grounds of Umaid Bhavan, a massive sandstone domed palace-turned luxury hotel, palace staff said.

Bal told the Press Trust of India news agency that Hurley will wear a white "lehanga" and "chunni" - a traditional Indian embroidered skirt and blouse - detailed in silver.

"They will look absolutely fabulous wearing the specially designed outfits, believe me," he told PTI.

The wedding party is then expected to move to the imposing Mehrangarh Fort that overlooks Jodhpur's famed old blue city for a final moonlight party, the AP reports.

Security around the party has been intense and roads leading to the venues have been blocked. A security team of security guards has been flown in from London and been bolstered by another 50 guards from Mumbai.

Several journalists have been manhandled by the guards while trying to get pictures of the wedding party.