U.S. President George W. Bush sees his country's new agreement with Brazil on ethanol as a way to boost alternative fuels production in the Americas and get more cars running on something other than gasoline. 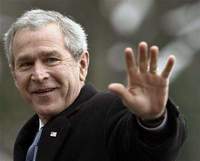 Demonstrators upset with Bush's visit here worry that the president and his biofuels ally, Brazilian President Luiz Inacio Lula da Silva, really have visions of an OPEC-like cartel on ethanol.

While Bush's nemesis in Latin America, Venezuelan President Hugo Chavez, is using his vast oil wealth to court allies in the region, Bush is sealing the deal Friday on an ethanol agreement with Brazil where nearly eight in 10 new cars run on fuel made from sugar cane.

Brazil is the first stop on Bush's eighth trip to Latin America, which also includes visits to Uruguay, Colombia, Guatemala and Mexico. On his 45-minute ride from the airport to his hotel on Thursday night, Bush's motorcade sped by a dozen or so gas stations where drivers in this traffic-clogged city can pump either gasoline or ethanol.

Bystanders gawked at Bush's limousine, but only a few people waved. Anti-American sentiment runs high in Brazil, especially over the war in Iraq. Bush missed the demonstrations earlier in the day protesting his visit.

Riot police fired tear gas and beat some protesters with batons after more than 6,000 people held a largely peaceful march through the financial district of Sao Paulo. About 4,000 agents, including Brazilian troops and FBI and U.S. Secret Service officers, are working to secure Bush's stay in the city that lasts about 24 hours.

Undeterred by protests, Bush says he is on a goodwill tour to talk about making sure the benefits of democracy - in the form of better housing, health care and education - are available to all Latin Americans, not just the wealthy.

He is visiting a community center in a neighborhood where the ultra rich live in close proximity to the desperately poor. U.S. companies have donated equipment to the center where Bush plans to highlight programs to give poor and disadvantaged youth a way forward in life.

In Latin America, however, Bush's trip is widely viewed as a way for the American president to counter the influence of Chavez, the populist ally of Cuba's Fidel Castro, who has led a leftward political shift in Venezuela, Ecuador, Bolivia and Nicaragua.

To taunt Bush, the Venezuelan leader will speak at an "anti-imperialist" rally in a soccer stadium on Saturday in Buenos Aires, Argentina, about 40 miles (65 kilometers) across the Plate River from Montevideo, where Bush will meet Uruguay's president, Tabor Vazquez.

While in Sao Paulo, Bush also is visiting a fuel depot, operated by a subsidiary of the state-owned Petrobras, where about 100 trucks come and go daily.

Some protesters, carrying stalks of sugar cane, protested the ethanol agreement, which is being formally signed by officials with the U.S. State Department and the Brazilian foreign ministry. The demonstrators warned that increased ethanol production could lead to social unrest because most operations are run by wealthy families or corporations that reap the profits, while the poor are left to cut the cane with machetes.

"Bush and his pals are trying to control the production of ethanol in Brazil, and that has to be stopped," said Suzanne Pereira dos Santos of Brazil's Landless Workers Movement.

The White House dismisses talk that the ethanol agreement between Bush and Silva is aimed at setting up an "OPEC of Ethanol" cartel led by Washington and Brasilia.

Bush says he wants to work with Brazil, a pioneer in ethanol production for decades, to push the development of alternative fuels in Central America and the Caribbean. He and Silva also want to see standards set in the growing industry to help turn ethanol into an internationally traded commodity, the AP reports.

"It's not about production-sharing, it's about encouraging development and encourage the Caribbean and Central American countries to get into the game," Bush's national security adviser, Stephen Hadley, said.

In January, Bush called on the U.S.Congress to require the annual use of 35 billion gallons (132 billion liters) of ethanol and other alternative fuels such as bio-diesel by 2017, a fivefold increase over current requirements. To help meet the goal, the president also is pushing research into making ethanol from material such as wood chips and switchgrass.

One roadblock in the Bush-Silva ethanol talks is a 54-cent tariff the United States has imposed on every gallon of ethanol imported from Brazil. Bush says it is not up for discussion. The administration says the tariff, which makes sugarcane ethanol more expensive in America, is needed to subsidize U.S. corn growers ramping up production of ethanol in the United States, the AP reports.

Silva, who has been invited to the Camp David presidential retreat on March 31, says he'll complain to Bush about the tariff, which he likens to other agricultural trade barriers the United States and Europe have in place.

Also on the agenda were efforts to salvage the World Trade Organization talks - the so-called Doha round - that collapsed in discord last summer over farm subsidies and other disputes.