Non-citizens are asking for the right to vote in New York City local elections - a right that would affect about 1.3 million legal adult residents in this famously immigrant-heavy city. 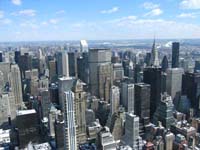 With more than 60 community groups publicly behind them, the non-citizen immigrants say they pay the same taxes, use the same services and want the same say in how the city is run.

"I care, and I would have thought that's what this country wants and needs," said Anja Rudiger, a permanent resident from Germany who moved to New York last summer. The proposal is restricted to legal residents of more than six months.

But the proposal, now before a City Council committee, touches a raw nerve in a country already debating what to do about the huge wave of recent immigrants.

"Has this city gone nuts?" one resident wrote to the New York Post, echoing similar letters to the newspaper. "If you don't like it here, go home or become a citizen."

The proposal has the support of just under a third of the City Council members. Mayor Michael Bloomberg opposes the measure.

"Until you're a citizen, I don't think you should vote," Bloomberg said last week.

But some non-citizens in the United States are already voting, taking advantage of a mostly forgotten tradition. Six communities in Maryland allow non-citizens to vote in local elections. In Chicago, non-citizens can vote in school board races. And in Massachusetts, three cities have approved non-citizen voting at the local level, including the city of Newton, which approved it last week. That move still needs the state Legislature's approval.

In St. Paul, Minnesota, a prominent political group is proposing to let non-citizens vote in city elections, though the state constitution requires voters to be citizens.

In a country where the wait for citizenship can last up to a decade, legal residents of the U.S. should have this right, supporters argue.

"We're in the midst of the largest migration of human beings in history," said Ron Hayduk, a political science professor and author of the 2006 book "Democracy for All: Restoring Immigrant Voting Rights in the United States." "Who is a real American? What is America becoming?"

Other countries around the world are facing similar questions. At least 24 nations let non-citizens vote at some level. European Union members allow resident aliens from other EU countries to vote in local elections. New Zealand lets any resident of a year or morevote in local and even national elections. Chile and Uruguay also allow non-citizen voting at the national level.

These days, even cities like New York are increasingly interested in granting voting rights to the non-citizens they attract in high numbers, said David Earnest, an international studies professor and author of the upcoming book "Old Nations, New Voters."

The attitude toward non-citizen voting was more open in 19th century America, Earnest said. States used it as an incentive to attract immigrants and put them on the path to citizenship. Echoes of the Revolutionary War cry "No taxation without representation" also counted. At its height in 1875, at least 22 states allowed non-citizen voters.

But that started to fade as the great wave of immigration around the start of the 20th century raised public suspicions of the newcomers and their loyalties.

Councilman Charles Barron, the sponsor of the Voting Rights Restoration Act in the New York City Council, said that years ago, when immigrants were mostly European, they had voting rights.

"Then when the complexion of immigrants changes, then all of a sudden, the laws change," Barron, who represents a Brooklyn district with a large immigrant population, told the New York Post.

Now non-citizen voting is so rare that it surprises even some U.S. immigration officials when they encounter it. The city clerk in Takoma Park, Maryland, where non-citizens can vote in local elections, keeps a form letter handy to explain the situation.

"When a person applies for citizenship, one of the questions is, 'Have you ever voted in an election?"' the clerk, Jessie Carpenter, said. "Naturally, they say they have. The (immigration authorities) don't really like that answer."

The number of non-citizens registered to vote is up in Takoma Park, but the number actually voting is down. In 2005, just 4 percent of 570 people voted, compared to 25 percent of 287 people in 1997, the AP reports.

"I think they lose interest," said Stanley Renshon, a political science professor who provided the numbers as part of an ongoing study of the issue. "They've got a lot more things to worry about."

But Rudiger looks forward to having the same right in New York that she had in another adopted city, London, where she lived and voted in local elections before coming to the United States.

"I have a job interview tomorrow with the New York City government," she added. "It's paradoxical that I could work for it but not vote for it."