As the multiracial band atop a tractor-trailer launches into a frantic carnival tune, the crowd pulsing below is a kaleidoscope of skintones, from the deepest black to the palest white and every shade in between. 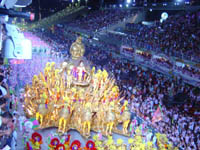 Nowhere is the vision of Brazil as a racial democracy more apparent than during carnival, when millions of people black and white, rich and poor, press up against one another in an annual party that begins in most of the country on Friday.

But the celebrations mask tensions that simmer beneath the surface in a nation with more blacks than any country after Nigeria, where most of the poor are descended from Africans and most of the rich mostly from Europeans.

About half of Brazilians are dark-skinned, but less than 3 percent of college graduates are, according to a Federal University of Rio de Janeiro study.

"Carnival is a moment when the rules of social engagement are suspended," said sociologist Roberto Da Matta. "Americans tend to read this literally: that there is no prejudice, no explicit rules for blacks. But there are all kinds of social distinctions, some of them very brutal."

In the world renowned carnival of Rio de Janeiro, 1,200 kilometers (750 miles) to the southwest, blacks often grumble about dark-skinned women passed over in favor of light-skinned actresses for the coveted roles of featured dancers.

And many complain that while the vast majority of the dancers in the premier carnival groups hail from the city's poor, largely black shantytowns, high ticket prices at the Sambadromo stadium, where those groups will parade Sunday and Monday nights, effectively exclude the poor.

In Salvador, carnival is a two-tiered system. Well-heeled revelers pay as much as 2,000 reals (US$930; EUR 700) for the right to party inside cordoned-off areas surrounding sound trucks as they slowly rumble through the city's streets.

Thousands of "cordeiros" - rope holders - are employed to wage dusk-to-dawn tugs of war to separate the paying revelers from the "pipoca" - "popcorn" - as the nonpaying masses are called.

"The cordeiros isolate the predominantly black `pipoca' from the middle-class groups where almost 100 percent of the participants are white or mixed-race with lighter skin," said Joao Jose Reis, a professor of black history at the Federal University of Bahia.

"The same situation goes on with the private boxes, which take up more space every year along the parade route and are equally stratified racially and socially."

While Salvador is more than 70 percent black, the bands that tend to parade during prime time and appear on TV are overwhelmingly white.

"The Blocos Afros have to become more professional and create a national identity so they can sell advertising and attract more sponsors," Leite said.

He said white artists such as Daniela Mercury and Ivete Sangalo have more radio hits, so they are favored by broadcasters. Salvador's most famous black performers such as Carlinhos Brown, Margareth Menezes and Olodum tend to be more famous overseas than they are in Brazil.

Alberto Pitta, director of the group Cortejo Afro, says it's a self-fulfilling prophecy: Without the access to prime-time performances, the groups don't get the exposure to attract advertising.

"It's not true we want to parade at 1 in the morning," Pitta said. "We can't attract sponsors at that hour."

In 2000, racism in Salvador's carnival was thrown into the open after several people filed lawsuits alleging they were barred from exclusive carnival groups because of their race. The commotion died down after the blocos agreed to provide justifications for any rejected applicants, and to allow appeals.

Salvador's first Bloco Afro, Ile Aye, was created in 1974 in part by two men denied access to another carnival group because they were black.

"Today you have black people circulating in areas they wouldn't have been seen in only a few years ago," Pitta said. "This has to do with the rise of Blocos Afros, which promoted black consciousness and improved self-esteem."

Black pride has often been elusive in Brazil, which in 1888 became the last nation in the Western Hemisphere to abolish slavery.

Unlike the United States, where years of segregation provided a strict sense of who was black and who wasn't, things in Brazil have never been that simple.

Portuguese settlers mixed freely with Indians and slaves, and their offspring have long valued their European heritage over African roots, the AP reports.

While around half of Brazil's 180 million people have African ancestors, only 6.2 percent call themselves black, according to the last census.

Still, some complain racism in carnival cuts both ways.

Vera Lacerda said she started one of Salvador's most popular carnival groups, Ara Ketu, after a Bloco Afro excluded her for not being black enough.

"I don't think you can fight racism with racism," she said.