Envoys to talks on North Korea's nuclear program debated Monday whether to extend negotiations for another day amid lingering differences on initial steps for Pyongyang to disarm. 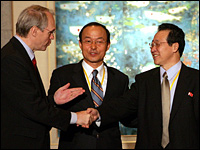 Over the previous four days, the six-country talks in Beijing have stalled over disagreements on energy assistance for the North in exchange for its abandonment of nuclear weapons.

"It is up to the North Koreans. We have put everything on the table. We have offered a way forward on a number of issues. They just need to make a decision," U.S. Assistant Secretary of State Christopher Hill told reporters before Monday's session, which he said would be the last day of talks.

But later, after a series of meetings between delegations, a South Korean official said negotiations were expected to be extended another day.

"Consultations among the countries are under way in a more sincere manner," the official said on condition of anonymity due to the ongoing diplomacy. "The talks are expected to continue tomorrow although China has not yet made any decision."

Japan said whether to continue the talks was still under debate.

"Russia has said 'no' to extending the talks and South Korea wants them to continue. Japan is assessing the situation," a Japanese Foreign Ministry official said Monday evening on condition of anonymity.

Chinese envoy Wu Dawei told a visiting Japanese lawmaker that North Korea had agreed to shut down its main nuclear reactor and submit a list of its atomic facilities. But the size of energy aid Pyongyang would get in return was still undecided, the lawmaker, Fukushiro Nukaga, told reporters Monday.

The current round of six-nation talks began on a promising note after the United States and North Korea signaled a willingness to compromise. But negotiations quickly became mired on the energy issue.

The negotiations which include the two Koreas, the U.S., Japan, China and Russia have plodded on intermittently for more than three years.

Adding pressure on the delegates was a sense that failure to reach an agreement this time could permanently doom the talks, reports AP.

"There's a certain life cycle to these negotiations," Hill said Monday. If North Korea rejects the current proposal, the American diplomat speculated that there would "be some political climate change, if not in the U.S., then maybe among some other countries."

But he added, "I don't want to predict that this is the last chance."

Negotiators had hoped the latest round would result in North Korea taking its first concrete steps in dismantling its nuclear program, an issue that became especially critical after it conducted its first nuclear test explosion in October.

South Korean and Japanese media reports gave varying accounts of how much energy North Korea was demanding, including up to 2 million kilowatts of electricity or 2 million tons of heavy fuel oil.