President Vladimir Putin on Monday met with Saudi and Russian businessmen seeking to explore investment opportunities and strengthen ties between the two countries, a day after the Russian leader and King Abdullah discussed regional tensions including Iraq and the Palestinian crisis. 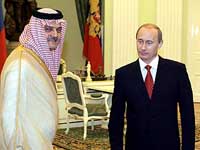 Putin's visit to this traditional U.S. ally comes as Saudi Arabia is opening up to other countries, particularly in Asia. Russia, the world's second-largest oil exporter behind Saudi Arabia, represents a potential ally with considerable political clout as a member of the U.N. Security Council and the so-called Quartet of Middle East peace mediators.

The U.S. is the main supplier of weapons to the oil-rich kingdom, but relations have been strained since the Sept. 11, 2001 attacks and Saudi Arabia may be looking to Russia to diversify its military suppliers.

Relations between Russian and the U.S. also have been stressed by disagreements over an array of international issues including U.S. criticism of Russia's record on democracy under Putin.

Before his arrival to Saudi Arabia, Putin leveled his harshest criticism yet of the former Cold War foe, saying it had "overstepped its national borders in every way" and is fostering a new global arms race." U.S. Secretary Robert Gates responded Sunday by saying "one Cold War is enough" and that he would go to Moscow to try to reduce tensions.

During their meeting, Abdullah told Putin the highest-level official to visit Saudi Arabia from Moscow that Saudi-Russian ties are "solid."

"I see in ... Putin a statesman and a man of peace and fairness," Abdullah said, according to official Saudi Press Agency. "That's why the kingdom of Saudi Arabia extends a hand of friendship to Russia."

Putin is set to meet with almost 200 Saudi and Russian businessmen at a Riyadh hotel before he leaves the kingdom and heads to Qatar in his first visit to that Gulf country.

Saudi businessmen have been looking to do business in countries other than the United States because of the difficulty in getting visas following the Sept. 11 attacks. The hijackings were carried out by 19 Arabs, including 15 Saudi.

Turki al-Rasheed, a Saudi who chairs an agricultural company which is one of the top 100 companies in the kingdom, said he was open to any investment Russia can offer.

"We cannot depend only on the West, and especially on the United States," al-Rasheed told The Associated Press.

"When I go as a businessman to the USA, I have to prove first I am not a criminal," al-Rasheed said. "While in a place like China I'm treated like a king."

Saudi Arabia and Moscow had full diplomatic relations until 1938, when dictator Josef Stalin closed his embassy in Saudi Arabia to save money. Several attempts to re-establish ties during the 1980s faltered over what Saudi Arabia called the Soviet Union's "belligerent attitude" toward its Muslim population. Muslims make up about 20 million of Russia's 145 million population.

In September 1990, the Soviet Union and the kingdom restored diplomatic relations at the height of tensions in the Gulf resulting from Iraq's August 1990 invasion and occupation of Kuwait. A U.S.-led coalition evicted the Iraqi army, ending a seven-month occupation, reports AP.

In September 2003, Abdullah, then crown prince, went to Moscow, becoming the most senior Saudi official to visit Russia since then-Prince Faisal, who later became king, visited in 1932.

During Abdullah's trip, Russian and Saudi energy ministers signed an intergovernmental agreement on cooperation in the oil and gas industry. The agreement also envisaged joint ventures in oil and gas exploration and scientific research.