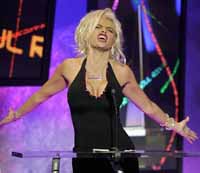 "I think she had too many drugs, just like Danny (Smith's late son)," her mother, Vergie Arthur, told ABC's "Good Morning America" on Friday. "I tried to warn her about drugs and the people she hung around with. She didn't listen.

"She was too drugged up."

Smith's attorney, Ron Rale, said the one-time reality TV star had been ill for several days with a fever and was still depressed over the death five months earlier of her 20-year-old son from what a private medical examiner determined was a combination of methadone and two antidepressants.

On Thursday, authorities say, a private nurse found Smith unconscious in her room at the Seminole Hard Rock Hotel and Casino and called emergency dispatchers. A bodyguard performed CPR, Seminole Police Chief Charlie Tiger said, but Smith was declared dead at a hospital.

Edwina Johnson, chief investigator for the Broward County Medical Examiner's Office, said the cause of death was under investigation and an autopsy would conducted Friday, reports AP.

If Smith died of natural causes, the findings will likely be announced quickly, but definitive results could take weeks, said Dr. Jose Perper, who was to perform the autopsy.

"I am not a prophet, and I cannot tell you before the autopsy what I am going to find," he said.

Smith's son's death in the Bahamas on Dec. 10 came just a few days after she gave birth to a daughter, Dannielynn, whose custody remains in dispute.