More than 1 million Czech homes without power from storm 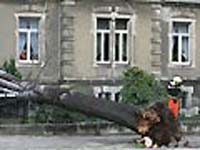 More than 1 million Czech homes without power from storm

Officials of the dominant CEZ utility reported that 27 percent of their customers, or more than 1 million, were left without electricity as the storm tore through the country.

Three people died in the storm in Czech Republic. One rescue worker was killed by a tree late Thursday and two men died in a car accident caused by a falling tree, reports AP.

Rail transportation was limited and one terminal of the Prague international airport was damaged, with the potential for delays in air traffic. Thousands of roads were blocked by falling trees.

The storm was forecast to recede Friday as unusually warm weather persists throughout the Czech Republic.