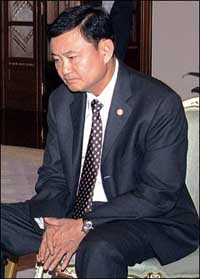 The Thai Foreign Ministry also announced Tuesday it was suspending a civil exchange program with Singapore and canceled a meeting about the program that was to be held later this month.

In response, Singapore's Foreign Ministry said the city-state was "saddened that the Thai government has chosen to take this course of action," stressed that Thaksin's visit was a "social and private meeting," and said the government hoped its neighbor would respect Singapore's position as a sovereign nation.

"There is no reason for Singapore to turn Dr. Thaksin away," a Singapore Foreign Ministry statement said late Tuesday.

"We informed the Singaporean (ambassador) that we are concerned by the political movements made by Thaksin," Prime Minister Surayud Chulanont told reporters after Thai Foreign Ministry officials met with Ambassador Peter Chan. "Singapore should be more cautious about allowing such movements since we have already revoked Thaksin's diplomatic passport."

Thaksin met with Singapore's Deputy Prime Minister S. Jayakumar during one of many trips he has taken in Asia since being ousted from power in a Sept. 19 coup. Coup leaders say the trips are politically motivated and last week revoked Thaksin's diplomatic passport.

The comments illustrated the growing concern and embarrassment among coup leaders and Thailand's military-installed government over Thaksin's travels. In recent months his trips to China, Hong Kong and Indonesia have made front-page headlines back home.

"Mr. Chan explained that the Singapore Government regarded this as a private visit," the ministry said in a statement. A statement issued Sunday described Jayakumar as an "old friend" of Thaksin's and said their meeting was "purely social and private."

The military council that removed Thaksin has renewed attempts to muzzle the media and its coverage of Thaksin. The generals asked broadcasters last week to limit coverage of comments by Thaksin and his representatives in the name of national unity, prompting a media outcry. But the government succeeded in blocking certain broadcasts.