Ice storm blamed for 36 deaths across six US states

The remains of a winter storm blamed for 36 deaths across six U.S. states spread in the Northeast, coating trees, power lines and roads with a shell of ice up to a half-inch (1-centimeter) thick and knocking out power to more than half a million homes and businesses. 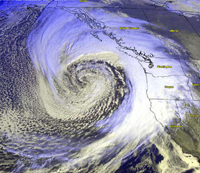 Ice storm blamed for 36 deaths across six US states

Waves of freezing rain, sleet and snow since Friday had been blamed for at least 15 deaths in Oklahoma, eight in Missouri, five in Iowa, three in Texas and four in New York and one in Maine. The storm also left more than half a million people without electricity in Missouri, Oklahoma, New York and New Hampshire on Monday.

The remains of the storm system streamed toward New England on Monday, shutting down numerous businesses, day care centers and schools in Maine with a mixture of sleet and snow that made roads treacherous.

Lower Michigan and parts of New England could see more than a foot (30 centimeters) of snow Monday, as rain fell from the lower Mississippi Valley up through the Ohio Valley, said National Weather Service meteorologist Joe Pedigo.

The weather and the need to de-ice aircraft prompted the cancellation of 160 scheduled departures Monday at Dallas-Fort Worth International Airport, DFW Airport spokesman Ken Capps said. More than 400 flights were canceled there Sunday, reports AP.

In Oklahoma, seven of the 15 deaths in the state occurred in one accident in which a minivan carrying 12 Mexican residents slid off an icy highway Sunday and struck an oncoming truck, the Highway Patrol said.

Late Sunday, President George W. Bush declared a federal disaster for Oklahoma because of the storm.