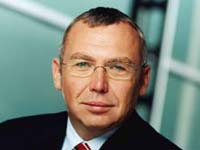 Social Democratic Party chief Alfred Gusenbauer, who will be sworn in as chancellor on Thursday along with the new Cabinet, appointed longtime party official Norbert Darabos as defense minister.

Darabos' first challenge will be to find a way to bring down the cost of a Ђ1.95 billion (US$2.5 billion) contract to buy 18 Eurofighter jets. The Social Democrats campaigned on a pledge to cancel the deal, which was signed under outgoing Chancellor Wolfgang Schuessel's government and triggered a public outcry.

Gusenbauer selected Maria Berger, a member of the European Parliament, as justice minister and tapped Erwin Buchinger, a senior official in the province of Salzburg, to run the social affairs ministry.

Rounding out the new chancellor's lineup was Claudia Schmied as minister of education, arts and culture; Doris Bures, a fierce critic of Schuessel's administration, as women's affairs minister; and Werner Faymann, who heads an agency overseeing Vienna's main public buildings, as infrastructure minister.

"I want to be captain of a federal government that's a team made up of personalities from the two different parties," Gusenbauer told state radio.

The division of ministries sprang from intense negotiations between Austria's two largest political parties talks that bogged down for weeks after the Social Democrats narrowly won Oct. 1 parliamentary elections.

Schuessel said Wilhelm Molterer, who was the People's Party's parliamentary leader in the previous government, will become finance minister and vice chancellor. He replaces Karl-Heinz Grasser, the former finance minister, who is quitting politics to return to the private sector.

Schuessel, Austria's chancellor since 2000, will not play a major part in the new government, opting instead for the relatively low-profile role as party leader in parliament, reports AP.

Josef Proell will stay on as agriculture minister. Johannes Hahn will be the new science minister.