Spanish doctor say Cuba's Castro does not have cancer

A Spanish surgeon who flew to Cuba last week to help treat Fidel Castro on Tuesday denied reports that the Cuban leader was suffering from cancer and insisted that he was recovering slowly but progressively from a serious operation. 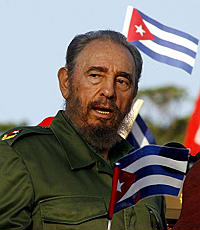 Spanish doctor say Cuba's Castro does not have cancer

"He hasn't got cancer" said Jose Luis Garcia Sabrido, chief surgeon at Madrid's Gregorio Maranon Hospital. Garcia Sabrido flew to Havana last Thursday to see Castro and consult with the Cuban leader's medical team on how his treatment was progressing.

"While respecting confidentiality, I can tell you that President Castro is not suffering from any malignant sickness," the Spanish doctor said, adding that he could not give precise details on the nature of his condition.

"It is a benign process in which there have been a series of complications," he added.

Castro, 80, has not appeared in public since undergoing emergency intestinal surgery in July, but has since released little information on his condition. Castro placed his younger brother, Raul, in charge of the government.

His medical condition is a state secret, but Cuban authorities have denied he suffers from terminal cancer, as U.S. intelligence officials have claimed. Cuban officials have nonetheless stopped insisting Castro will return to power.

Asked whether he thought Castro would be physically capable of once again governing Cuba, Garcia Sabrido said:

"If his recovery is absolute, then naturally, yes," said the doctor.

"I think that in these moments his decision to delegate power implies that he must now be dedicated to his recovery. What happens in the future will be an absolutely personal matter."

There was no mention of Garcia Sabrido's visit in Cuba's state media.

Some doctors believe Castro may suffer from diverticular disease, which can cause bleeding in the lower intestine, especially in people over 60. In severe cases, emergency surgery may be required.

Garcia Sabrido wrote in the medical journal Archives of Surgery in 1988 about a temporary stomach "zipper" that Spanish surgeons had used on patients to provide repeated easy access for draining and treating abdominal infections.

On Tuesday, he ruled out another operation for Castro for the moment.

"It is not planned that he will undergo another operation for the moment," he said. "His condition is stable. He is recovering from a very serious operation."

He said he was impressed by Castro's good spirits.

"He wants to return to work everyday but medical recommendations demand caution," he said, adding that one of the problems the Cuban medical team had was limiting the president's activities.

"He is a patient of 80 years and he will have the limitations of recovery of a person of his age," said Garcia Sabrido.

"His intellectual activity is intact, I'd say fantastic," the surgeon said. "I was amazed at his capacity to relate personal and historical anecdotes."