Sultan Mizan Zainal Abidin was crowned as Malaysia's 13th king in a traditional ceremony Wednesday filled with pomp and pageantry, becoming the second youngest monarch to rule the country. 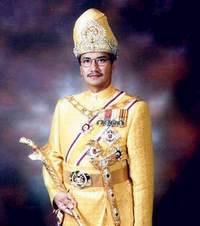 Mizan, the sultan of the oil-and-gas rich Terengganu state, was sworn in at the palace as the 13th Yang di-Pertuan Agong - the Malay title for the king - under a unique system that allows traditional state rulers to take turns ruling the entire country for five years.

At 44, Mizan is the youngest of the current nine state rulers. He succeeded 63-year-old Syed Sirajuddin Syed Putra Jamalullail, the ruler of Perlis state, who was given a grand farewell Tuesday after completing his five-year reign.

Under an unusual rotational system introduced toward the end of British colonial rule in the 1950s, the nine hereditary state rulers take turns on the throne for five years.

Earlier, Mizan and queen Nur Zahirah were given a 21-gun salute in a ceremonial welcome at the Parliament after inspecting an honor guard and meeting Prime Minister Abdullah Ahmad Badawi and other Cabinet ministers, the AP says.

They were then driven in a Rolls-Royce to the palace for the swearing in ceremony, causing a traffic snarl in parts of Kuala Lumpur.

Mizan, dressed in resplendent yellow, the royal color, took his oath of office and signed his investiture letter witnessed by other state rulers and Cabinet ministers. The ceremony was broadcast live on national television.

Prime Minister Abdullah then proclaimed Mizan as Malaysia's new king and the ceremony ended with prayers of blessings for him.

With Wednesday's swearing-in ceremony, Mizan officially takes over as monarch. He will be formally installed at a ceremony next year at a date to be set, in a grander affair including other ceremonial rituals and traditions.

The king's role is largely ceremonial, and the power to govern lies with Parliament and the prime minister. But for Malay Muslims, who comprise some 60 percent of Malaysia's 26 million people, the king is the supreme upholder of Malay tradition and symbolic head of Islam.

Mizan received his early education in Terengganu and furthered his studies in Australia and the U.S. International University-Europe in London, where he obtained a degree in international relations. He also attended Britain's Sandhurst Royal Military Academy.

Mizan was crowned Terengganu's sultan in 1998, succeeding his late father and becoming the country's youngest state ruler at age 36. He and Queen Nur Zahirah have four children.

An avid sportsman, Mizan was to have represented Malaysia in the equestrian competition at the Asian Games in Doha but he withdrew from the event because it clashed with his coronation.

Mizan's 8-year-old son Tengku Muhammad Ismail was Tuesday appointed the Regent of Terengganu and would helm the state in the absence of his father for the next five years. A three-member advisory council has been set up to help the young prince carry out his duties.