South Korea plans to kill cats and dogs to try to prevent the spread of bird flu after an outbreak of the deadly H5N1 virus at a chicken farm last week, officials said Monday. 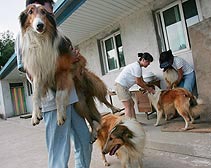 Animal health experts, however, suggested it was "a bit of an extreme measure" when there was no definitive scientific evidence to suggest that cats or dogs could pass the virus to humans.

Quarantine officials have already killed 125,000 chickens within a 500-meter (1,650-foot) radius of the outbreak site in Iksan, about 250 kilometers (155 miles) south of Seoul, the Agriculture Ministry said.

Officials began slaughtering poultry on Sunday, a day after they confirmed that the outbreak was caused by the H5N1 strain, reports AP.

They plan to slaughter a total of 236,000 poultry, as well as an unspecified number of other animals, including pigs, and all dogs and cats in the area by Thursday, the ministry said. About 6 million eggs also will be destroyed, it said.

Slaughtering cats and dogs near an area infected with bird flu would be highly unusual in Asia. Indonesia has killed pigs in the past, but most countries concentrate solely on destroying poultry.

However, it would not be the first time for South Korea to kill cats and dogs due bird flu concerns. An official at the Agriculture Ministry said South Korea had slaughtered cats and dogs along with 5.3 million birds during the last known outbreak of bird flu in 2003.