Segolene Royal gave birth to her fourth child while she was France's environment minister. To get by, she did what some other moms in high-pressure jobs do: She tucked her kids in to bed at night, then went back to the office. 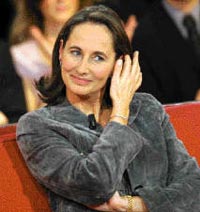 Royal, the Socialist candidate in this spring's presidential elections, has become a symbol of modern French womanhood. Well-spoken, smart and stylish, the 53-year-old lawmaker is a mother of four who balanced her family life with a career as one of France's most powerful women.

The story of Royal's rise carries reminders of how good French women have it and how much they still have to fight for. Generous maternity and childcar  benefits make it relatively easy to find a comfortable work-life balance. Yet somehow, few French women rise to positions of power, especially in politics.

Historically, France has long revered strong women, like Joan of Arc, Marie Curie and Simone de Beauvoir, who wrote one of the founding texts of modern feminism. But France also has treated its women as sex objects, with Paris the capital of cosmetics and fashion.

The symbol of liberty and the French Republic is a woman, an anonymous image of virtue called Marianne. In Eugene Delacroix' "Liberty Leading the People" which appeared for decades on the 100-franc note she was a strong, bare-breasted rebel leading the charge against the monarchy.

Yet even Marianne is an ambiguous image of female power. When Marianne was reincarnated in the 20th century as a statue for French town halls, the first model was curvy, pouting Brigitte Bardot.

Royal's political success makes her an exception. If she beats the center-right candidate most probably Interior Minister Nicolas Sarkozy she will be France's first woman president.

Her party has overlooked her potential for years, with presidential hopes focused instead on the father of her children, Socialist Party boss Francois Hollande. Ordinary voters preferred Royal, who built her popularity as France's family minister, and believed in her pledge to fine-tune the system that makes France a great place to raise a family, reports AP.

French benefits start with maternity leave a minimum 16 weeks, though mothers who give birth to twins get 34 weeks. France also has an 11-day paternity leave, thanks to a reform by Royal when she was family minister.

Childcare is affordable, and the excellent preschool system is free. A new law encourages women to have a third child, granting parents Ђ750 (US$940) a month if they stay home for a year afterward. And the list goes on.

While much of the continent is in a panic about aging populations, France has the second-highest birth rate in the 25-nation European Union 1.94 children born to the average woman. Only the Irish have slightly more, at 1.99.