Ukraine began quietly marking the second anniversary of the Orange Revolution on Wednesday, with both supporters and opponents of the mass protests pausing to recall an event that all agree massively changed this ex-Soviet republic. 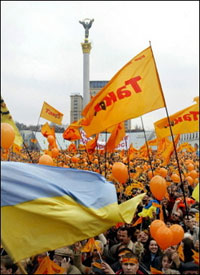 No official festivities were planned, however, after Ukraine's political landscape shifted dramatically earlier this year, bringing back to power the man whose fraud-marred vote sparked the uprising.

Little orange was visible on the streets of Kiev, but by mid-afternoon a couple of dozen people were milling around Independence Square under the cold, gray skies waving orange flags

"Despite what anyone thinks about this page of our history, it was a turning point .... (it brought) a new understanding of the relationship between the government and citizens," Prime Minister Viktor Yanukovych said during a Cabinet session.

It was Yanukovych's presidential victory that sparked the uprising. Now he is back in his old job as prime minister after his party triumphed in this year's parliamentary elections, which the international community hailed as Ukraine's freest and fairest ever. Yanukovych rebounded amid widespread disappointment in the Orange Revolution team.

Ukrainians' quality of life did not significantly improve, and Yushchenko's allies began fighting among themselves, slinging about allegations of corruption. Ukraine's hope for a quick embrace by the West proved premature, and the pro-Western leaders' chilly relations with Moscow led to a massive increase in gas prices that filtered down to every Ukrainian household.

Yushchenko was planning to host a small reception at Mariyinsky Palace and address the nation later Tuesday, while the Orange Revolution's heroine Yulia Tymoshenko was purposely out of the country on a visit to European officials in Brussels. She has said that political leaders don't deserve to publicly mark the anniversary until they have fulfilled the promises they gave the hundreds of thousands of protesters two years ago.

Other Orange Revolution leaders had said they would gather on Independence Square later Tuesday. Some people had erected a few small tents, but unlike last year's commemorations no stage was set up and no concerts or fireworks were planned. And the numbers were about the same as any typical working day.

"The people deserve to celebrate this it was our success, our victory," said student Leka Lekishvili, 16.

On the eve of the celebrations, Yushchenko defended the uprising.

"The main thing that was achieved is something which you never feel when you have it _ it is freedom," Yushchenko said. "It cannot be put on a sandwich, it cannot be seen by the size of your salary."

The Orange Revolution began hours after the polls closed in the Nov. 21, 2004, presidential election. As the Central Election Commission began churning out fraudulent vote counts in favor of Yanukovych, Russia's choice, Yushchenko the pro-Western candidate summoned his supporters to Independence Square.

They flooded in. Night after night, Yushchenko and his allies rallied the orange-bedecked crowds from a giant stage, promising them a bright, democratic future. Musicians kept the crowds boogying through the cold.

But the euphoria ended as Ukrainians grew disillusioned with the power struggles, rising gasoline and meat prices, and allegations of corruption among a group that had promised to be squeaky clean.

By the one-year anniversary, the leaders were divided, a division that cost them dearly in the March parliamentary election.

Yanukovych's pro-Russian party won the most votes, put together a majority coalition and formed the Cabinet. Yanukovych took back the premier's job. And thanks to constitutional reforms, he enjoys more power than before.

Speaking during his Cabinet session, Yanukovych said Wednesday, "Now is the time to unite."