US state court opens the door to gay marriage, but lets lawmakers make the final call

New Jersey's highest court opened the door to making the state the second in the U.S. to allow gay marriage, ruling that lawmakers must offer same-sex couples either marriage or something like it, such as civil unions. 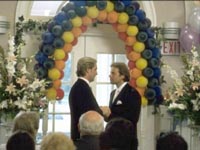 US state court opens the door to gay marriage, but lets lawmakers make the final call

In a ruling that fell short of what either side wanted or most feared, the state Supreme Court declared that gay couples are entitled to the same rights as heterosexual ones. The justices gave lawmakers 180 days to rewrite the laws.

Wednesday's ruling is similar to the 1999 high-court ruling in Vermont that led the state to create civil unions, which confer all of the rights and benefits available to married couples under state law.

"Although we cannot find that a fundamental right to same-sex marriage exists in this state, the unequal dispensation of rights and benefits to committed same-sex partners can no longer be tolerated under our state Constitution," Justice Barry T. Albin wrote for the four-member majority.

The court said the Legislature "must either amend the marriage statutes to include same-sex couples or create a parallel statutory structure" that gives gays all the privileges and obligations married couples have.

The vote was 4-3, with the three dissenting justices arguing that the majority did not go far enough. They asserted that gay couples should have the "right to the title of marriage" as well as its benefits.

Gay rights activists had seen New Jersey as a promising place because it is a largely Democratic state in the Northeast. The only state to allow gay marriage is Massachusetts. The only states allowing civil unions are Vermont and Connecticut. New Jersey is also one of just five states that have no law or constitutional amendment expressly banning gay marriage.

If the court had legalized gay marriage outright, the effect could have been more far-reaching, and New Jersey could have become more of a magnet for gay couples than Massachusetts, which has a law barring out-of-state couples from marrying there if their marriages would not be recognized in their home states. New Jersey has no such law, reports AP.

A clear-cut ruling legalizing gay marriage this close to Election Day could also have been a political bombshell, galvanizing Republicans and the religious right. Eight states have gay marriage bans on their ballots in November. Democrats are trying to win control of Congress in the Nov. 7 elections.

New Jersey Republicans, who are in the minority in the Legislature, said they would work to ban same-sex unions by enacting a constitutional amendment.