Could the North's recent provocations be a call for help from Kim Jong Il?

North Korea is struggling to survive with a stagnant economy and aftereffects from years of famine, facing yet another harsh winter following summer floods that may have killed hundreds. 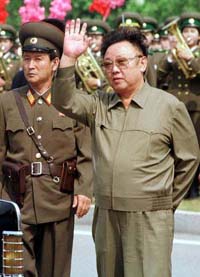 Could the North's recent provocations be a call for help from Kim Jong Il?

Could North Korean leader Kim Jong Il be using the provocation of a nuclear test simply as a bargaining chip to get the aid he needs to placate his people and stay in power? Pyongyang's recent nuclear test, labeled by the world as a provocation, could actually be a desperate cry for help.

Recent moves by Kim that have drawn world attention missile launches in July as well as the reported nuclear test may have been carefully calculated to ignite a crisis but stop short of conflict.

Given Kim's limited options, the provocations may be the only signal Kim is able to send and maintain power, trying to avert a regime change that also would have dangerous and unpredictable fallout for the world.

The problem now is how North Korea can return to talks after the U.N. Security Council voted unanimously on Saturday to impose punishing sanctions on Pyongyang without Kim losing "face."

North Korea has suffered deeply in its isolation for decades as one of the globe's No. 1 bad guys, reports AP.

Its economy is in shambles, and as many as 2 million people may have died from famine in the 1990s. Winter is coming soon, and the country also was swept by devastating floods in mid-July that killed hundreds, although the real death toll and damage likely will never be known.

Recently, Washington has sought to sever the country from the limited access it does have to the outside world through the international financial system.