Arrest warrants have been issued against 88 former Iraqi officials, including 15 ministers, on charges of corruption, an independent anti-corruption commission said Tuesday. 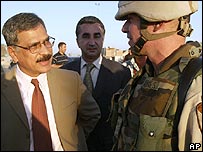 Among those wanted are 61 "living as fugitives abroad," said Ali al-Shabout, spokesman for the Public Integrity Commission. Interpol has been informed that they are wanted for prosecution in Iraq, he said.

The agency, which answers to parliament, is run by a judge who serves a five-year term. It was established in 2003 after the U.S.-led invasion.

Iraq has been struggling to deal with endemic corruption in the civil services.

Al-Shabout said the agency has documented the loss of US$7.5 billion (about Ђ6.0 billion) through corruption over the past three years.

At the end of the last year, six arrest warrants on corruption charges were issued against former Iraqi ministers who served in the two previous postwar governments.

One of those six was Iraq's former electricity minister, Ayham al-Samarie, who was arrested last month in Iraq.

Former Defense Minister Hazem Shaalan is charged with being responsible for the disappearance or misappropriation of US$1 billion (Ђ790 million) in military procurement funds. He has denied the charges, and was last known to be in Britain, reports AP.

Another former electricity minister, Muhssin Shalash, was convicted of corruption and sentenced in absentia to 60 years in prison. His whereabouts are unknown.

In addition to Shaalan the others former ministers of labor, transportation and housing remain at large and will likely be tried in absentia if they do not surrender.