The aging black and white photograph on the NASA Web site shows a towheaded girl dressed in traditional Chinese clothes, pointing playfully at the camera, with a middle-aged Chinese woman standing next to her. 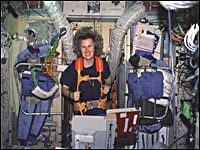 Nearly 60 years later, former American astronaut Shannon Lucid was back in China and feeling excited about visiting the country of her birth.

"My theory is that everybody when they're young, they have a certain feeling of home for the place they grew up in," Lucid said in an interview Monday. "I have that with China."

Lucid spent 223 days in space on five missions between 1985 and 1996, setting a record for a woman. In China, she was on a different mission: accompanying NASA administrator Michael Griffin on the first visit to the Chinese capital by the head of the American space agency.

Her presence in the American delegation added a distinctly human touch to official contacts between two agencies that have been suspicious of the other's programs. Washington distrusts China's military-dominated and secretive National Space Administration, while Beijing believes NASA has tried to keep China out of international space exploration efforts.

Lucid said she hoped that Griffin's trip would help break the ice.

"This is a first step in cooperation," she said. "I'm personally very excited we could come over here," she said, adding that China had done "a great job" in its space program.

China's first manned space flight in 2003 made it only the third nation after Russia and the United States to successfully send a human into orbit on its own. A second manned flight took place last October while a third is planned, perhaps for next year.

This week's visit was Lucid's third since her childhood. She was born in Shanghai in 1943, the daughter of American missionaries. Evacuated to the United States as an infant during World War II, she returned with her family when the war ended in 1945.

"I remember so much about that time," she said. "I remember especially that I couldn't speak Chinese and I felt bad about it."

At age 5 Lucid took her first airplane trip to the Gulong Mountains in southern China. The excitement stayed with her, and she vowed that she would learn to fly herself.

Shortly after the communists took power in China in 1949, Lucid and her family returned to the United States. While a student at the University of Oklahoma, she became a licensed pilot and went on to take three degrees, including a Ph.D. in biochemistry in 1973.

In 1978 she was selected in NASA's first group of women astronauts, together with Margaret Rhea Seddon, Kathryn Sullivan, Judith Resnick, Anna Fisher and Sally Ride.

Lucid said that during her flights in space she had always paid special attention when she was orbiting China, trying to pick out well known Chinese landmarks.

She spotted a number of them, she said, including the Gobi desert in the west, the serpentine course of the Yangtze River, and the bright lights of China's booming coastal cities, reports AP.

But the Great Wall, commonly reputed to be the only manmade object visible from space, failed to make her list.