A court in Pakistan on Tuesday ordered the father of a Scottish girl at the center of a custody battle to surrender her passport to ensure she is not taken out of Pakistan. 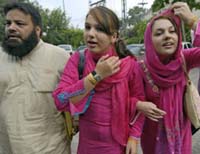 The High Court in the eastern city of Lahore issued the order to counter attempts by the estranged mother of the 12-year-old girl Molly Campbell, also called Misbah Iram Ahmed Rana, to win custody.

The mother, Louise Campbell, launched a petition to challenge a temporary custody order awarded to the girl's father, Sajad Ahmed Rana, by a lower court in Pakistan.

Rana was ordered not to remove the girl from the court's jurisdiction before the next hearing in the case, scheduled for Oct. 9, when Rana's lawyer must submit a reply to the mother's petition, reports AP.

Louise Campbell has petitioned the court alleging her daughter was illegally taken from Scotland to Pakistan by her former husband and elder daughter.

Naheeda Mahboob Elahi, a lawyer for Campbell, said Tuesday's High Court order was aimed at ensuring that the girl is not taken outside Pakistan before it makes any decision in the case.