Pakistani man gets 18 years in U.S. prison in drugs-for-missiles plot

A Pakistani man was sentenced Monday to more than 18 years in prison for conspiring with an Indian-born U.S. citizen to obtain and sell Stinger anti-aircraft missiles to the Taliban and al-Qaida. 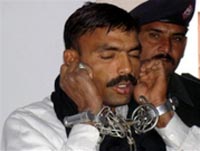 Pakistani man gets 18 years in U.S. prison in drugs-for-missiles plot

Shah admitted that he tried to sell five tons of hashish and a half-ton of heroin in exchange for cash and four shoulder-fired Stinger missiles, which he and the other defendants intended to sell to members of the Taliban. Such missiles could be used to shoot down airplanes, including commercial jets, flying at low altitudes.

Shah knew at the time that the Taliban was the same as al-Qaida, prosecutors said.

Shah, Ali and Afridi were arrested on Sept. 20, 2002, by police in Hong Kong who received a tip from the FBI. The three were secretly videotaped in meetings days earlier with undercover FBI agents at a Hong Kong hotel. Ali also met in April 2002 with an undercover agent in San Diego, reports AP.

Andrew Nietor, an attorney for Shah, did not respond to a phone message left seeking comment.