A bulldog in the eastern German state of Saxony-Anhalt ripped free of his leash and attacked a 10-year-old boy who was riding his bicycle, biting the child in the head, neck and back, police said Monday. 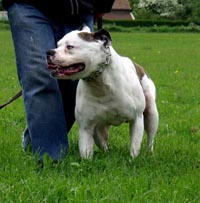 The 50-kilogram (110-pound) American bulldog also bit his 25-year-old owner in the hand, as he tried to pry the animal from the child, who was taken to the hospital, said Frank Weipert, a spokesman for police in the town of Stendal.

"Doctors say the child is in a very serious condition," Weipert said.

Police shot the animal to prevent it from further attacks, after both they and employees of a nearby animal shelter failed to calm it down, reports AP.

Authorities are now investigating whether the dog's owner was negligent in failing to muzzle the animal. The dog was on a leash.