NASA administrator Michael Griffin was in Beijing on Monday for talks with Chinese officials that China's government hopes will lead to cooperation in space exploration. 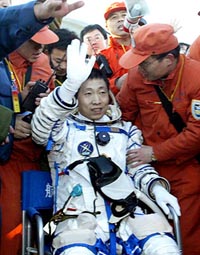 Griffin is the highest-ranking U.S. space official to visit Beijing. His visit follows lobbying by China for exchanges on space with Washington, which has been reluctant to collaborate with the secretive, military-run Chinese program.

On Monday the official Xinhua News Agency quoted Sun as saying he had offered Griffin a four-point proposal to boost space cooperation between the countries.

The Xinhua report did not elaborate on the contents of the proposal.

Earlier, Griffin tried to downplay expectations about the trip, saying it was only as a "get-acquainted session" with Chinese officials.

China's first manned space flight in 2003 made it only the third nation after Russia and the United States to fire a human into orbit on its own. China's second manned flight took place last October.

China has tried to make its program appear more open, letting U.S. officials and foreign reporters visit its Beijing mission control center and the Gobi Desert launch base for its manned flights.

The Chinese Foreign Ministry said last week that Beijing hopes for closer collaboration with the United States, Russia and other governments on space efforts, reports AP.

"We hope that through such ties, we could establish a stable and friendly cooperation in outer space and explore the possibility of the peaceful use of outer space," ministry spokesman Qin Gang said.