A 9-year-old boy died from bird flu hours after he was admitted to a hospital in the Indonesian capital, becoming the 51st confirmed fatality in the world's hardest-hit nation, a senior health official said Monday. 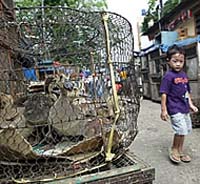 Indonesia has attracted international criticism for not doing enough to stamp out the virus or to inform its 220 million people of the dangers. Many experts see it as the weak link in global efforts to ward off a possible pandemic.

The country's human toll continues to mount with two children dying in the last week.

"By the time he arrived at the hospital, it was too late," he said, adding that the boy had recent contact with infected chickens, reports AP.

The H5N1 strain of bird flu has killed at least 144 people worldwide since it started ravaging poultry stocks in Asia three years ago, according to the World Health Organization, which has yet to update its Web site with the boy's death or that of an 11-year-old who passed away on Sept. 18.

Most human deaths have been traced to contact with sick birds, but experts fear the virus could mutate into a more transmissible form, potentially causing a deadly global pandemic.

David Nabarro, the U.N. coordinator for avian and pandemic influenza, during a visit to Indonesia this month said that while the cash-strapped government had made improvements in fighting the virus, it still had a monumental task ahead.

He promised to urge the international community to release badly needed funds to help the nation the fight the disease.