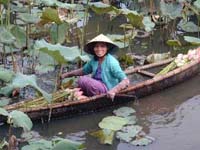 Winds from the storm, which was expected to make landfall Monday afternoon, knocked over an electricity pole in Quang Nam province, killing a man early Monday, said Ngo Thi Phuoc of the Flood and Storm Control Department in Danang. Quang Nam is 800 kilometers (500 miles) south of Hanoi.

A second man's death also was attributed to the storm, Ngo said, though he had no details.

Heavy rains have lashed the central provinces over the past two days, but no floods were reported, Phuoc said.

An official from the national weather forecast center said the storm, which was not given a name, packed winds of up to 74 kilometers (46 miles) per hour, reports AP.

Vietnam is prone to floods and typhoons which kill hundreds of people each year. In May, Typhoon Chanchu battered the South China Sea, killing 20 Vietnamese fishermen and leaving 256 others missing.