On a tape of a closed-door meeting with advisers, Governor Arnold Schwarzenegger said that Cubans and Puerto Ricans are naturally feisty and temperamental because of their combination of "black blood" and "Latino blood." 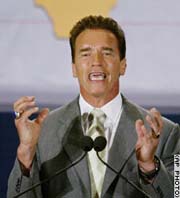 "I mean Cuban, Puerto-Rican, they are all very hot," the governor said on the recording obtained by the Los Angeles Times and made available on its Web site Friday. "They have the, you know, part of the black blood in them and part of the Latino blood in them that together makes it."

The six-minute tape was from a March 3 speechwriting session with Schwarzenegger. On it, Schwarzenegger and Chief of Staff Susan Kennedy speak affectionately of Assemblywoman Bonnie Garcia of Cathedral City, California, and speculate about her nationality.

Garcia, who is Puerto Rican and the legislature's only Latina Republican, told the Times the governor's remarks did not bother her.

Schwarzenegger spokeswoman Margita Thompson said in a statement the remarks were "a small part of a long conversation that is taken totally out of context."

"The governor respects every member of the Legislature and holds them in the highest regard," Thompson said. "It is not uncommon for him to have fun and joke with the members while they're working, especially during very tense negotiations."

Schwarzenegger Communications Director Adam Mendelsohn added the governor's office would not release the tape publicly because it was a private conversation, reports AP.