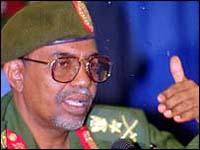 The president of Sudan agreed Friday to release an American journalist and two Chadians jailed on charges of espionage after meeting with a U.S. governor, a spokesman for Gov. Bill Richardson said.

"The governor asked for their release on humanitarian grounds," Shipley said. "He knows the president understands the value of a free and independent press and the president agreed" to the release, reports AP.