The United States on Wednesday warned North Korea that the world would consider a nuclear test by the reclusive country a "deeply provocative act." 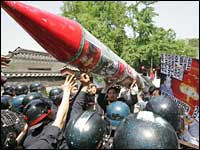 State Department spokesman Sean McCormack also urged nations, "including China, to state very clearly to North Korea that this would be a very provocative act and it would only add to and deepen their isolation."

His comments come amid worry that North Korea might soon test a nuclear bomb. South Korea's main spy agency warned last week that Pyongyang could test a nuclear device at any time. McCormack would not comment specifically about reports of a possible test.

But, he said, "such an act would clearly be a deeply provocative act to the international community."

Negotiations have been stalled since November, however, with the North demanding the United States lift financial restrictions imposed for alleged financial wrongdoing, including what Washington says is state-sponsored counterfeiting of U.S. currency.

McCormack said of the U.S. financial restrictions that "North Korea has earned its way to this position the honest way: through their misbehavior and through their actions."

"It's pretty simple," he said. "Don't engage in counterfeiting, don't engage in illicit behavior, and you won't have these kinds of problems."

Separately, Undersecretary of State Robert Joseph said Wednesday that "North Korea has been, I think, the principal supplier to Iran of ballistic missile technologies." He refused to comment on the nuclear connections between the countries.

The United States says Iran is continuing to make strides toward building nuclear weapons. Iran maintains that its program is for peaceful purposes.