Iran's apparent refusal to suspend uranium enrichment, in a counterproposal to a Western nuclear incentives package, sets the stage for a showdown at the U.N. Security Council later this month - with no certainty the United States will win a promise of tough sanctions from its partners. 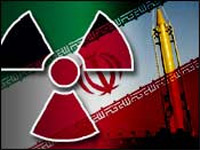 Diplomats from Europe, the U.S., Russia and China were poring over the details of Iran's offer Wednesday, a day after Tehran presented it, and withheld any detailed public comment. But initial comments from Russia and China made clear the United States is likely to face difficulty getting at least those nations to agree to any tough sanctions against Iran.

Russia's Foreign Ministry said it would continue to seek a political, negotiated solution to the dispute with Iran over the nuclear program. China appealed for dialogue, urging "constructive measures" by Iran but also urging other parties to "remain calm and patient, show flexibility, stick to the orientation of peaceful resolution and create favorable conditions for resuming talks as soon as possible."

The White House has so far held off commenting until it can study the offer. But U.S. ambassador to the United Nations, John Bolton, said Tuesday that Washington was prepared to move forward with sanctions against Tehran if the offer was not positive, the AP says.

The European Union's foreign policy chief, Javier Solana, said the document was "extensive" and required "a detailed and careful analysis" France's foreign minister said Wednesday that the document was complex and that it was consulting with partners on it.

Iran said Tuesday it was ready for "serious negotiations" on its nuclear program and cast the counterproposal as a new formula to resolve the crisis with the West. But a semiofficial news agency said the government was unwilling to abandon uranium enrichment - the key U.S. demand.

The Iranian offer appeared aimed at enticing European countries and China and Russia into further negotiations by offering a broad set of proposals vague enough to hold out the hope of progress.

If the Iranians were to leave the door open to halting enrichment as talks progress, for example, that would drive a wedge between the Americans, British and French on one side and the Russians and Chinese on the other.

Last month, Russia said the Security Council was in no rush to pressure Iran, striking a more conciliatory tone than the United States.

Iran delivered the written proposal in response to a package of incentives offered by the United States and five other world powers to persuade Iran to roll back on its nuclear program - and offer punishments if it does not.

The world powers, the five permanent U.N. Security Council members plus Germany, have given Iran until Aug. 31 to accept the package.

The yearlong standoff over Tehran's nuclear program revolves around Iran's insistence that it wants to master the technology simply to generate civilian nuclearpower. But critics say Iran is interested in uranium enrichment because it wants to make nuclear weapons.

The current drama is playing out amid fears that the ability of the pro-Iranian Hezbollah guerrillas in Lebanon to withstand 34 days of Israeli bombardment has emboldened hard-liners in Tehran to risk a showdown with the Americans.

There has also been speculation in the West that Iran encouraged Hezbollah to provoke the Israelis to distract attention from its nuclear ambitions.

Iran has pursued a confrontational stance on the nuclear issue since the election of President Mahmoud Ahmadinejad last year. The hard-line president has used the nuclear issue to encourage a sense of national pride among Iranians.

Iran's top nuclear negotiator, Ali Larijani, refused to disclose Tuesday whether the response included an offer to suspend uranium enrichment. But the semiofficial Fars news agency reported that Iran had rejected calls to suspend "nuclear activities" - or uranium enrichment - and "instead has offered a new formula to resolve the issues through dialogue."

The state-run television quoted Larijani as telling the diplomats Iran "is prepared as of Aug. 23rd (Wednesday) to enter serious negotiations" with the countries that proposed the incentives package.

Last month, the Security Council set the Aug. 31 deadline for Iran to halt uranium enrichment or face economic and political sanctions. Iran called the resolution "illegal" but had said it was willing to offer a "multifaceted response" to then incentives package offered in June.

Iranian officials familiar with Larijani's response said Tehran also had included a list of questions in its counterproposal, although they would not give details. The officials spoke on condition of anonymity because of the sensitivity of the information.

"Iran has provided a comprehensive response to everything said in the Western package. In addition, Iran, in its formal response, has asked some questions to be answered," one official said.

The Iranians have signaled strongly for weeks that they are not prepared to abandon uranium enrichment as a precondition to talks. Last month, a senior Iranian lawmaker said the country's parliament was preparing to debate withdrawal from the Nuclear Nonproliferation Treaty if the U.N. Security Council adopts a resolution to force Tehran to suspend enrichment.

In February, Iran for the first time produced its first batch of low-enriched uranium, using a cascade of 164 centrifuges. In the last few weeks, Iran has prevented U.N. nuclear agency inspectors from inspecting an underground site meant to shelter its uranium enrichment program from attack, diplomats said Monday.

The Western incentives package has not been made public but some details have leaked. They include an offer to lift a ban on sales of Boeing passenger aircraft, plus providing Iran with some nuclear technology to build reactors for civilian purposes.