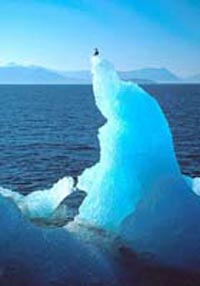 The papers, both published Thursday in the journal Science, provide the latest evidence of how climate change is transforming the global landscape. University of Texas researchers, using twin satellites, determined that the Greenland ice sheet, the earth's second-largest reservoir of fresh water, is melting at a rate three times faster than during the previous five years.

A separate study by 16 international scientists concluded that Antarctic snowfall accumulation has remained steady over the past 50 years, with no increases that might have mitigated the melting of the ice shelf, as some researchers had assumed would occur.

The study finds that the melting polar ice is raising sea levels around the globe. This could have a serious impact as global sea levels will rise by 6.5 metres if all the ice on Greenland were to melt, which could result in many islands being wiped out and even low-lying countries such as the Netherlands.

According to the National Geographic News, the challenge to scientists is to now examine whether the island is losing more ice mass through melting than it gains from new snow.

Greenland's ice sheet is almost five kilometres thick in some places.
The results of the study come from nearly a decade's satellite observations from a team of the University of Texas, reports the San Francisco Chronicle, GameSHOUT.com reports.

The satellites used in the Greenland study was apparently also used recently by two University of Colorado researchers to monitor the ice sheet loss on Antarctica, where similar trends were found