The inaugural three-day Hong Kong Sex Workers' Film Festival that kicks off Friday is an underfunded but comprehensive look at the lives of prostitutes across Asia - told by the sex workers themselves. 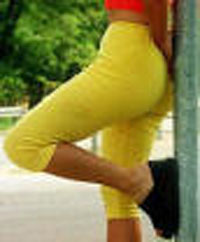 The festival, hosted by the Hong Kong sex worker support group Zi Teng, aims to offer an alternative to the stylized and stereotypical portrayals of prostitutes in mainstream cinema, curator Yau Ching said.

The nine-movie program includes contributions from Canada, the United States, Taiwan, India and Hong Kong. The films are not only about sex workers, but are either made entirely by them or in conjunction with a director.

Yau, who teaches cultural studies at Hong Kong's Lingnan University, said that mainstream filmmakers tend to take a "whore or Madonna" approach to depicting prostitutes, painting them as either victim or predator.

She said she hopes to break such stereotypes by presenting a series of documentaries that address the day-to-day realities of prostitution from the perspective of sex workers.

Letting the subjects tell their own stories offers a unique viewpoint, Yau said.

Among the offerings is "The Story of the Taipei Prostitutes," about a campaign to fight a ban on prostitution in Taiwan's capital. Another short film outlines the "sex worker's manifesto" drafted at the first National Conference of Sex Workers in Calcutta, India, in 1997, according to the AP.