Kim Jong Il attended a Russian art performance and visited a tire factory July 4, a day before the missile launches, and he hasn't appeared publicly since, according to South Korea's spy agency. 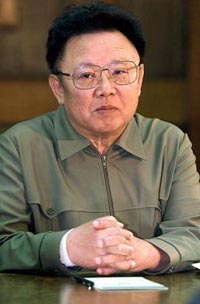 Kim usually visits military units a few times a month to bolster his "songun," or "military-first," policy that rewards the 1.1 million-strong military with the country's scarce resources despite chronic food shortages, according to the AP.

Some North Korean watchers have speculated that Kim might be in a bunker since the communist country is believed to have imposed a quasi-war footing after the U.N. Security Council passed a resolution condemning the North's missile tests and calling for nations to stop any missile-related trade with the country.

The North test-launched seven missiles July 5, including a new model believed capable of reaching the U.S. that failed shortly after takeoff.

In 2003, Kim disappeared from the public eye for seven weeks when his hard-line regime quit the Nuclear Nonproliferation Treaty and the United States invaded Iraq.

Cheong Seong-chang, a North Korea analyst at the independent Sejong Institute, attributed Kim's latest absence to massive flood damage in North Korea, saying he has shied away from the public in times of crisis in the past.

Last month's heavy rains in North Korea killed at least 549 and left 295 others missing while flooding more than 48,000 acres (19,425 hectares) of farmland and destroying nearly 4,500 homes, according to a pro-North Korean newspaper in Japan.

A senior South Korean intelligence official, who asked not to be identified due to the sensitivity of his position, didn't attach any significance to Kim's seeming absence from public, saying he often disappeared from the public.