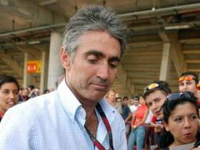 When he arrived, he admitted to assaulting the bouncer and failing to leave a licensed premises early Saturday morning.

Although his lawyer said the 41-year-old Doohan could not remember much of the incident at The Honeypot, a strip club in this northern Australian city.

Doohan allegedly head-butted bouncer Adrian Hyde with the back of his head as he was being escorted from the club for being intoxicated and for trying to remove clothing. He was arrested by police and spent 14 hours in custody.

Hyde reported having a swollen lip, but no significant injuries.

Magistrate Greg Cavanagh told the court Doohan had besmirched his reputation and decided not to record a conviction against the five-time 500 CC world champion, the AP reports.

Doohan declined to comment as he left the court, the AP reports.