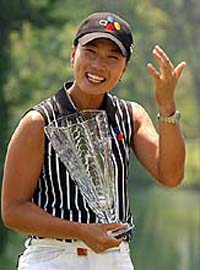 The South Korean winner of this title in 2001 returned a 6-over 78 in the first round on Thursday. She came to the course on Friday and told officials she could not play because of the injury.

Pak, who won two majors in her first season on the LPGA Tour in 1998, has been dogged by neck, shoulder, lower back and finger injuries in the past year. It is the second time in a row that she had withdrawn from the British Open, the AP reports.