The protesters, mostly members of Malaysia's ruling coalition and led by the prime minister's son in law, raised their fists and chanted slogans against Washington's backing of Israel in the Lebanon conflict. 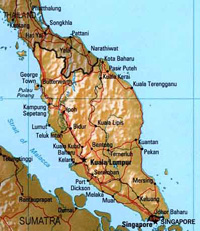 Riot police, some mounted on horses, tried to form a human barrier to stop the protesters who were wearing orange bandanas with the slogan: "Save Lebanon, Stop Israel." While the main mass of the protesters were blocked a smaller group with Khairy broke through.

By allowing the protest to take place so close to the convention center, the Malaysian government is apparently sending a signal that it is upset with the U.S. government's refusal to persuade Israeli to end its military strikes on Lebanon.

Such protests are rare in Malaysia, where a police permit is required for public demonstrations.

Khairy was briefly let into the conference center but ushered out immediately. He and others sat on the floor, refusing to leave even as heavy rain fell.

Khairy said the people of Malaysia do not want Rice in the country "because you have done nothing to stop the genocide and the murder of Palestinians and Lebanese."

Earlier the protesters burned U.S. flags and an effigy of Rice. They also beat an effigy of President George W. Bush with sticks. About 2 kilometers (1 mile) from the convention center, members of the opposition Islamic fundamentalist party held a noisy demonstration outside the U.S. Embassy.

Rice is in Malaysia to attend the ASEAN Regional Forum meeting, hosted annually by the Association of Southeast Asian Nations. The meeting this year has been dominated by the Middle East conflict and the North Korean nuclear crisis.