With an own goal and a missed penalty, Spain won its final warmup match the hard way. That's how striker Fernando Torres wants it. 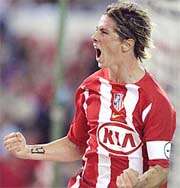 Torres missed the penalty against Croatia on Wednesday before scoring a late winner in a 2-1 victory.

"It's important to win while suffering sometimes, because in the World Cup for sure there will be complicated games," the Atletico Madrid striker said Thursday after Spain's first team practice in Germany.

The team heads into the training camp in Kamen brimming confident of shedding Spain's reputation as an underachiever.

"What we lack is success, being able to complete a good World Cup," veteran goalkeeper Santiago Canizares said.

The squad now has a historic opportunity "to leave Spanish football were it deserves to be," said Canizares, Spain's second choice behind Iker Casillas.

Despite being a powerhouse at club level, Spanish teams captured this season's European Champion's League and UEFA Cup _ Spain's best World Cup result was a fourth-place finish in 1950. It has been knocked out in the quarterfinals four times.

This year, Spain is the favorite to win Group H ahead of Ukraine, Tunisia and Saudi Arabia. But playmaker Xavi Hernandez warned against underestimating any adversary.

"On paper Spain is the favorite," the FC Barcelona midfielder said. "But these days, everything is very close, and any rival can complicate your life. I hope we can move on past the group stage and if we can do it in first place, then all the better."

Hundreds of spectators, squinting in the evening sun, followed the team's first practice at the sports center in Kamen, a quiet city of 48,000.

Half the team, including most of the players in the starting lineup against Croatia, did stretching exercises, while the others divided into two teams and played five-a-side.

Earlier Thursday, the players were treated to an official welcoming ceremony, accompanied by a local oompah band, at the quaint Opherdicke manor before heading to their training camp in Kamen.

Against Croatia, Spain recovered from an own-goal by central defender Pablo Ibanez to win its final warmup in Geneva.

Spain kicks off against Ukraine on June 14, reports AP.