Germany attracts prostitutes on the eve of football World Cup

As soccer's best players prepare to square off this summer at the World Cup, businesses across Germany are anticipating a huge windfall with the arrival of an estimated 1 million fans from around the world. 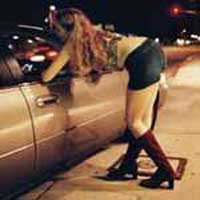 Germany attracts prostitutes on the eve of football World Cup

The sex industry is no exception.

Just down the street from Berlin's Olympic Stadium, which hosts the final, stands the city's largest brothel, Artemis - established in September with an eye on capitalizing on the influx of World Cup visitors.

The 6.5 million-euro (US$8 million) 4-storey, 40-bedroom bordello is decorated with liberal doses of faux animal prints and velvet on beds, walls and furniture, amid an eclectic mix of Greek and Roman statuary under Moorish arches.

Among amenities are saunas, a pool, and a solarium. There's also satellite television in case anyone bothers to watch the soccer matches being played at the stadium a few blocks away.

The establishment has been averaging 130 visitors a day, many from the nearby convention center, and is planning to blitz the Olympic Stadium and Berlin hotels with leaflets during the World Cup.

The stadium, built by the Nazis for the 1936 Olympics, will host six World Cup matches, including the July 9 final.

"We're thinking of staying open around the clock during the month," said manager Egbert Krumeich. "I think we will have a lot more clients coming here, maybe 250 to 350 per day, but maybe as many as 500."

Helin, a 30-year-old Turkish woman who works at Artemis and gave only her working name, said she was toying with the idea of splitting her time between Berlin and Munich to earn as much as possible during the monthlong tournament.

"With the World Cup there will be plenty of crazy people in Germany, but there will also be very good customers with a lot of money - the earning possibilities could go up 50 percent at least," she said, shifting her yellow bath-towel and tapping her pink flip-flops as she puffed a Marlboro ahead of her shift.

"But I think it will also be a lot of fun - I'll get to meet a lot of people from all around."

Prostitution is legal in Germany, with about 400,000 people registered in the trade; the women who work in Artemis pay taxes and receive social benefits like people in any other job. At Artemis, men pay 70 euros (US$85) to get in, which goes to the brothel, and then pay 60 euros (US$70) directly to the women for their services for a half hour. The prostitutes pay a fee of 50 euros (US$60) a day for the use of the place and are allowed to live in the establishment if they want.

It's an innovative system that advocates say shields the women from pimps, and gives them the freedom to pick and choose their clients.

However, the anticipated World Cup sex-trade boom has also raised fears of an increase in forced prostitution with an estimated 40,000 women from poorer Eastern European countries expected to be heading to Germany for the World Cup, some against their will. Already, the European Union estimates more than 100,000 women in Europe each year are forced into prostitution.

"If the number of prostitutes goes up, the assumption is that on the fringes the criminal forced prostitution will also go up," said Ulrike Helwerth of the National Council of German Women's Organizations.

She said any large event - even the Frankfurt Book Fair - attracts prostitutes, but that the World Cup attracts so much international attention that it was a natural "hook" for her group's campaign.

"The World Cup is the platform because you can reach a much larger public, and also highlight that on the peripheries of such events there is a dark side," Helwerth said.

The group wants stronger controls against human trafficking and also hopes to reach prostitutes' customers with the message that if they suspect the woman they are with is not there voluntarily, they should report it to the police.

Helin, one of Berlin's 8,000 registered prostitutes, said she has a different concern about the influx of newcomers - competition, the AP says.

"Some of us have worked a long time at this job in Germany and if all the girls come here like they did in Greece for the Olympics, it will be bad," she said.