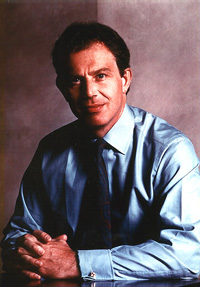 The two leaders arrived at a villa in a vast park near Rome's Janiculum Hill in early afternoon for their first talks since Prodi, a center-left leader, took the reins of government in mid-May.

Blair and Prodi's predecessor Silvio Berlusconi were two of the staunchest allies of U.S. President George W. Bush in the war on Iraq.

Defying strong opposition at home to the war, Berlusconi sent some 3,000 troops into Iraq after the ouster of Saddam Hussein to help with security and reconstruction, but started withdrawing the troops as his re-election bid neared.

There are now some 2,700 Italian troops in Iraq, and under a timetable worked out during Berlusconi's tenure, which Prodi's government has pledged to follow, the number will drop to 1,600 sometime this month, the AP reports.

Both Berlusconi and Prodi, who narrowly won parliamentary elections in April, had campaigned on pledges to get all the Italian troops out of Iraq by the end of 2006, the AP reports.

Prodi and his foreign minister, Massimo D'Alema, have said that they will consult with their allies as well as with the Iraqi government before any final withdrawal plan is worked out.

Aides to Prodi said that while Iraq would be the focus of the meeting Friday between Blair and Prodi, European issues would also be discussed.