U.S.-led coalition aircraft bombed Taliban militants who had gathered in southern Afghanistan, reportedly killing dozens, while five Canadian soldiers were hurt and up to six militants killed in a gunbattle, officials said Monday. 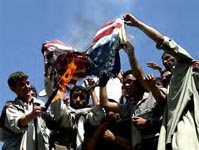 The Canadians were on a patrol about 20 kilometers (13 miles) west of Kandahar when they were ambushed by militants early Monday, said Maj. Mario Couture, a coalition spokesman.

Five soldiers were wounded, including one who was seriously hurt and flown to Germany for medical treatment, he said.

The body of one militant was left behind, while up to five others were believed to have been killed and their bodies taken away, he said.

A military statement said Afghan security forces were attacked by militants who then retreated after a counterattack. Coalition aircraft "tracked the more than 30 enemy fighters" to a known Taliban compound and destroyed it with airstrikes, the statement said.

Provincial deputy governor, Amir Mohammed Akhunzada, said more than 50 militants were believed to have been killed, including Taliban commanders, although police had yet to reach the mountainous location to confirm the casualties.

Maj. Quentin Innis, a coalition spokesman in Kandahar, said coalition aircraft had dropped two 500-pound bombs on the compound, causing "a lot" of casualties. He said up to 50 militants could have been killed.

The airstrikes were originally reported to have been Monday morning, but a military statement said the attack was Sunday evening.

In recent weeks, southern Afghanistan has been hit by some of the deadliest fighting since the ouster of the Taliban regime in late 2001. Militants have stepped up attacks in their former heartland, drawing a fierce response from coalition and Afghan forces.

Before Monday's violence, as many as 372 people, mostly militants, have been reported killed since May 17, according to coalition and Afghan figures.

On Sunday, authorities found the decapitated bodies of three police dumped in a field elsewhere in Helmand, two days after they disappeared. Officials blamed Taliban militants for the killings, reports AP.

According to Washington Post, the rioters tried to break into numerous buildings, including banks, guesthouses and aid agencies. In several places they exchanged fire with police and security guards, witnesses said. On one private videotape of a street incident, a guard could be heard shouting in the Dari language, "I am a Muslim. I am not an infidel. I am not an American. Please let me go."

The spokesman, Maj. Matt Hackathorn, said an angry crowd converged on the scene and threw stones, and that Afghan police tried to push the crowd back to allow U.S. military personnel to leave. He said U.S. forces fired into the air "as a show of force," but that no shots were fired into the crowd.