President Hamid Karzai urged Taliban militants on Friday to end the violence raging across the country and join forces with the new government to help Afghanistan's reconstruction. 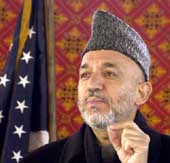 Meanwhile, Afghan and coalition troops arrested 10 Taliban militants in a large-scale operation in southern Kandahar province, the provincial governor said. And about 25 kilometers (15 miles) east of the city of Kandahar, a senior Afghan police official narrowly escaped an assassination attempt when a roadside bomb exploded near his vehicle, wounding his two guards.

Karzai again blamed "outsiders" for fanning his country's insurgency, which he said had claimed the lives of many Afghans, from teachers to police and Taliban extremists.

"I want them (the Taliban) to return to us with their guns and to serve their countrymen," Karzai said during a military parade marking the 14th anniversary of the mujahedeen victory over the communist government, which was followed by a bloody four-year civil war.

Remnants of the former Taliban government, which was toppled by a U.S.-led invasion in 2001, and other militants have been stepping up attacks against Afghan security forces and U.S.-led coalition troops in recent months.

"The government had information that the Taliban were hiding in this area, and with support of coalition forces, at least 10 Taliban were arrested and the operation is ongoing," Khalid told The Associated Press.

Niaz Mohammed, the chief of nearby Danan district, said he was unharmed after coming under attack Friday but his two police guards were wounded and in stable condition.

"After the Taliban's reign ended, normal life started but the enemies of security and peace continued interfering and they are killing the engineers, elders and educated, destroying schools and madrassas (religious schools), and killing Afghans, whether they be the Taliban, police or innocent," Karzai said, reports AP.