The towering 3.20-meter (10.5-foot) bronze, an exact copy of the statue of Iron Felix that pro-democracy crowds tore down opposite KGB headquarters in Moscow in 1991, now occupies a spot inside the grounds of the Military Academy. 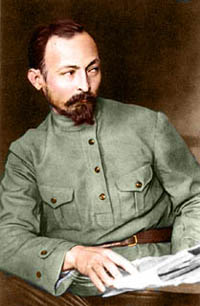 Stepan Sukhorenko, the head of Belarus' main security service, which has kept its Soviet-era acronym KGB, attended the opening ceremony.

Dzerzhinsky, deeply reviled by critics of the Soviet era, helped establish the first Soviet secret service, called the Cheka, in 1917 under Bolshevik leader Vladimir Lenin. The Cheka, a forerunner of the KGB, was responsible for mass arrests and executions.

Oleg Gulak of the Belarusian Helsinki Committee rights group condemned the move as "an insult to the memory of the millions of victims of the repressive machine founded by Iron Felix."

The leader of the Social-Democratic Party, Nikolai Statkevich, insisted that Dzerzhinsky, responsible for mass executions of Bolshevik opponents, was not "a figure of Belarusian history we should be proud of." The secret service chief was born in modern-day Belarus.

But the head of the Belarusian border guard service, Gen. Alexander Pavlosvsky, defended the decision to erect a statue of Dzerzhinsky next to the faculty for frontier guard officers.

Belarusian President Alexander Lukashenko, in power since 1994, is an open admirer of the Soviet Union and a pariah to the West because of his government's crackdown on dissent and the media.